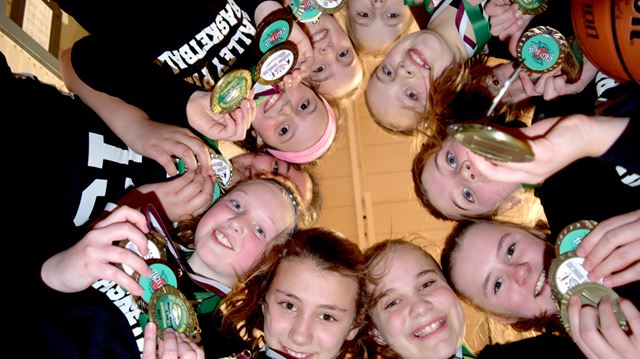 Derek Dunn/Metroland
A Valley Pride basketball team has won an unprecedented three tournaments in a row. The U12 girls have yet to even lose a game, going 13-0. Find out how they did it, and what the future holds for them, on page 21. 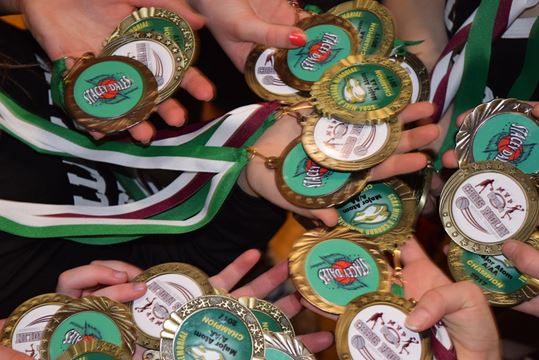 Derek Dunn/Metroland
The team has racked up at least 36 medals this year, and are aiming for at least another 12.

A basketball team made up of players from the Arnprior and Renfrew area has done what none have in the past.

The Valley Pride U12 girls’ team is the first to win three tournaments in a row. Not only that, but they haven’t even lost a tournament game. Not in Brockville. Not in Gloucester. Not in the west end of Ottawa.

How did they do it?

“They’ve got great grit,” said Chris Spratt who, along with daughter Sarah, coaches the team. “They’ve been behind in games and it looks like the other team is about to walk away with it, and they find a way to come back.”

He is especially proud of a championship win that saw the team claw back to tie it up and force overtime.

Chris has coached basketball for 25 years — high school teams with big teenage boys. He is more than impressed at how tough the girls are on the court.

Team captain Anna Hirst agrees that the key to their success is heart, but she also qualifies it.

“We are very energetic. We’re competitive; but we’re friendly, too. We don’t get a lot of fouls,” said the high-scoring point guard. “And we’re super fast!”

Anna’s favourite tournament was the one in Brockville, due to the fact that they stayed in a hotel — with a pool.

This is just her second year at basketball, but she really loves playing games with her teammates. She’s looking forward to the team’s fourth and final tournament.

Chris said the game is growing in this region, and that development at younger ages is high.

“What you are seeing at this age used to not happen until Grade 9,” he said. “So, that’s a big difference.

The attraction isn’t necessarily due to the rise of the NBA’s Toronto Raptors, either, he indicated.

The Valley Pride Major Atom Girls basketball squad travelled to Brockville January 27th-29th for the 5th Annual Stacey Dales tournament. The team Showed great character during pool play as they were trailing behind in each game. The girls posted a 3-0 record finishing first in their division.

. Valley Pride found themselves matched up against the Nepean Blue Devils for the Gold Medal match. These teams have squared up before and both squads knew they were in for a competitive showdown. The outcome looked grim as the squad trailed by 7 in the last 4 minutes of play. With a strong defence, a couple key turnovers and some spotless shooting on the foul line - the squad was able to match digits in the scoreboard with under a minute of play. The girls won the championship game in a exciting overtime finish. This victory found the Atom Girls Capturing their second gold medal in tournament play this season.